On Saturday, on my drive to my Weight Watchers meeting I saw 3 bunnies!  I couldn’t believe it.  They were all spied along the same street.  It’s a very winding street with speed bumps and I like to think the speed bumps were there to keep the bunnies safe.  It was funny that when I got to the meeting and told my friend Debbie about the sighting she said “Do you talk to them and shoo them away and tell them to stay out of the street and be careful?”  I confessed that I did.  Guess that makes the speed bump comment a little less embarrassing… 😉

I’ve been thinking lately how I missed oat bran for breakfast.  I had stocked up on it the last time I bought it because the store had been out of it on my previous visit so I have plenty.  Sunday was the day.  Decided I’d feed my need. 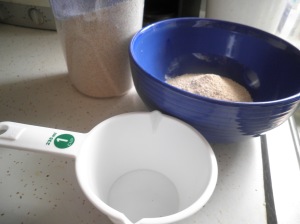 Nice before photo…there is no “after” photo.  The reason is, I guess I really haven’t had oat bran in a while and the oat bran disgraced itself all over my microwave.  😦

The really annoying part is that I lost so much of it.  When I finally got the chance to eat it…after cleanup…it was delicious and I’ve decided I really need to have it for breakfast more often.

I decided to try for a less messy breakfast for Monday and put together overnight oats in a jar (OOIAJ).

Still trying to get the hang of the overnight oats thing.  I added 1/2 cup oats, 1/2 cup almond milk, 1/2 cup Greek yogurt, 2 tsps Chia seeds and about 1 Tbsp of honey.  We’ll see if I like it cold or if I need to microwave it as I’ve had to in the past.

Did a few chores around the house and then Ralph decided we should go to the mall to use a birthday gift card to Sears (which I had found during cleanup!)  He needed a new sports jacket and thought that would be a good use of it.

After malling, we decided we were hungry.  Ralph is flexible and I decided that if I spoke up and suggested somewhere that would let me make good choices, I could stay on track.  I’m really getting excited about staying on track lately…have you noticed?!? 😉

On the way home, we stopped at Picasso’s Pizza again.  They have one of the best Big Tossed salads for only $5.00.  They also have excellent balsamic vinaigrette as I’ve mentioned before.

I like it because they add sweet bell peppers to it, a nice twist you don’t get on many salads.  Adds a lot of flavor.

When we got home, I was really tired for some reason.  I decided to relax and read while I watched a Law & Order: SVU marathon.  What could be better?

Accompanied by a Tootsie Pop…Wild Mango Berry…one of my new favorites!

Snacking was tough last night.  Couldn’t get myself under control.  I had popcorn and then I wanted something sweet.  I remembered I had the makings (what makings) for one of my favorite snacks.  Graham crackers and apple butter.  As sweet snacks go, it’s not too bad and it’s something that I don’t usually over indulge.  I enjoyed it.  Probably should have just had another Tootsie Pop… 😦

Anyway, this morning we’re back to bunnies.  Since I didn’t get any photos of the Saturday ones, here’s a Monday bunny. When I saw him out the window, I was sure he would scurry off before I got outside with my camera.  Fortunately, he did not!

He sat patiently for me.

Looks like the same photo, but actually it’s not.  When I tried to get closer…off he went.  I need a better telephoto!  Sometime soon…maybe…

Off now to eat my overnight oats, exercise and then on to perfect my sorting and packing skills.