Ralph always tells me that I have a scary memory…I remember things that no one would ever remember…not as good as Marilu Henner, but close! 😉 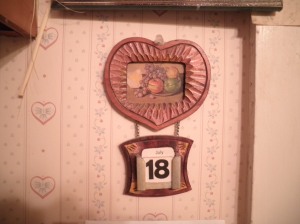 Well one of the things I remember is the day that he and I decided that we “liked” each other.  Sounds hokey, like we were going steady.  But it actually took some doing to get us together.  The photo above is a little calendar that was my Grandmother’s.  It hangs on our kitchen wall, with the date…July 18.  It was 1991…

We had met earlier in the year, through a mutual friend.  Ralph says he liked me as soon as he saw me and that I ignored him.  Since I’m in control of the keyboard, I’m telling this my way.  That’ll show him for not figuring out computers!

I was dating someone else as was Ralph.  Ralph being a police detective working 4-12 shifts, would end up at a particular diner for his dinner.  This happened to be the diner where I would frequently have dinner with the guy I was dating.  When Ralph would come in, he’d see us and sit with us.  The other guy would get annoyed and basically ignore us (he would ignore just me when Ralph wasn’t there!)  We bit by bit got to know each other.

He then decided we should have a surprise birthday party for our friend who had introduced us.  He asked me to help.  He asked me to dinner at a different diner with the intention of going over details for the party and to give me a check for the food because I was in charge of the shopping.

We spent the evening talking and laughing and as we were leaving to go to our cars, we realized we had not spoken at all about the party.  So…we had to get together again! 😉  I’m still not sure if that was on purpose or by accident.  Either way, we had to get together several more times and eventually, on July 18, we by mutual agreement decided this was it.  During the time we’d known each other, Ralph had broken up with the girl he was seeing.  I had to break up with the guy I was seeing.  That is a whole other story!! But we did it. 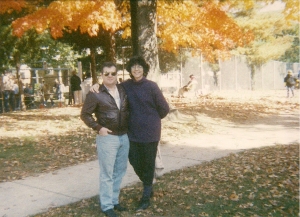 This is the only photo I can find at the moment from that time.  It’s from the Fall of that year and we were at the park, yes That park!  It was for the battle re-enactment they do every October.  Ralph looks a little like Fonzie, I look a little like…Me!

We have been very happy through these years.  We’ve had our ups and downs like everyone else.  One of the first things that Ralph said to me after we were a couple was…”I want to celebrate our fiftieth anniversary together.”  We’ll both have to live to be REALLY old to do that but I’m willing to give it a try if he is. 😉

I got a really interesting anniversary gift in the mail.  It wasn’t from Ralph…and it wasn’t delivered to my house but none the less…here it is… 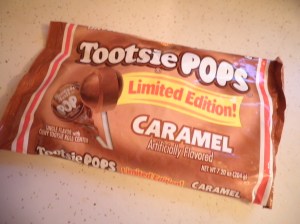 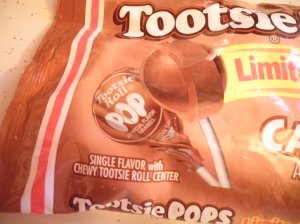 Yes, Boys and Girls…CARAMEL  Tootsie Pops!!!  That which I have been whining about for how long?!?  I’m a little confused…not quite sure who sent them.  There is a name and address on the package and I will be sending the person a thank you.  Is it a BCDC reader?  If so how did they know where to send it?  If you are the kind person and you’re reading this, please send me a comment so I know the story.  In any event, Thank You and I LOVE YOU!!

So back to the story of Ralph and Fran.  Here we are 20 years later… 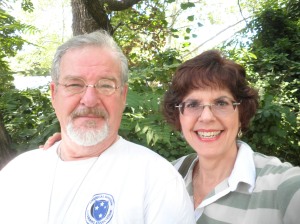 A little rougher around the edges.  I’m getting better at taking self-photos.  I do always seem to have that slightly anxious look on my face, though.  Ah, well, with time all things will work themselves out.  Ralph’s and my story worked itself out.  We certainly make each other crazy sometimes, but we truly love each other.  I always used to thank Ralph’s Mother on his birthday.  I told her that I was the one who got the gift.  Not sure she believed me, but I meant it then, and I mean it now.  Thanks, Ralph, for 20 wonderful years!

This entry was posted in Uncategorized and tagged Great Tootsie Love. Bookmark the permalink.