At the end of June, I became aware of National Blog Posting Month also known as NaBloPoMo.  Basically it’s a group of people who have committed to updating their blogs once a day for a month.

This is the badge for July 2011.  I was never able to successfully post this to the face of BCDC but have added it periodically for you all to see and get to know what I was doing.  Here it is again one last time.  Today is my last post for NaBloPoMo-July 2011.  I feel very good about completing the task.  Since starting BCDC I have been pretty faithful about posting everyday, but there were times when life got in the way.  This gave me a focus and I posted every day in July.  I also posted my updates to the NaBloPoMo site to share with others on the same journey.

I’ve enjoyed it.  I often talk about the need to focus, I think this has been a help with focusing on the things I must do.  I’m glad I decided to do it in July because August and September are going to be crazy.  Don’t know what will happen!

After Weight Watchers on Saturday morning, I came home to accomplish a few more things around the house. Leaving for Florida on Monday was a surprise and I needed to get more laundry done, etc. I’m feeling in control of that situation, just have to get my now clean laundry into the suitcase along with all the little incidentals I usually put on a list to remember, and I’ll be set.  Maybe I should make that list just to be sure… 😉  Now if I could just get someone to do the flying for me and I’d be all set!

Ralph and I were both hungry early because neither of us had breakfast.  A quick trip to Picasso’s fixed that.  Ralph got a pizza steak and I got my old reliable, pepper and egg sandwich.

With some American cheese on it…yummy!  This is such a filling and healthy thing to get at a pizza place.  I wish more of them offered it.  We needed to eat early because we were going to Ele’s for dinner to visit with her and Little Michael. 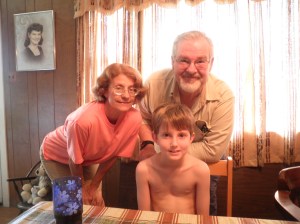 Grummy, Little Michael and Uncle Ralph.  FYI, Michael is not in the buff, just shirtless as he tends to be this time of year…he’s so cute! 😉 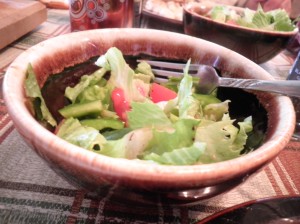 My semi-empty salad dish.  I almost forgot again…Yikes!  I had made a big salad of the leftover veggies in my fridge.  Knowing that Ralph won’t eat them while I’m away, Ele got custody of the rest of the salad, yellow squash, eggplants, tomatoes and green peppers.  I didn’t get the chance to use them so I didn’t want them to go to waste.  Ele’s a veggie kind of gal anyway, she’ll make good use of them! 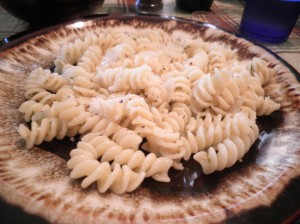 Garlic and Oil!  One of Ele’s specialties!  Ele and I spend a lot of time trying to recreate the dishes that Mom and Grandmom used to make.  Of course there was rarely a written recipe which makes life more difficult.  This was one of Grandmom’s and I think Ele has come as close as possible to making it like Gram’s!  Of course, if Grandpop was here, he’d put ketchup on it! 😉 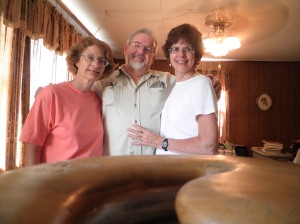 Little Michael’s first attempt at taking a photo of Ele Ralph and Me.  I think this one is actually pretty cute!

I LOVE this picture!  My two favorite guys together again.  They’ve been buddies since Mikey was a tiny little guy.  They have a very special relationship.  Very cool.

We had a wonderful evening with Ele and Little Michael.  Ralph and I were both pretty tired.  He came home for a nap and I watched an NCIS marathon…How is it I never watched this show when it first came on?  Glad I’m getting the chance to catch up on it!

Monday will be a travel day for me, so I’m not sure when I’ll have a chance to post.  I’ll be doing Twitter updates, so you can check those to see how things are going on Monday.

This entry was posted in Uncategorized and tagged pasta. Bookmark the permalink.

4 responses to “Completing The Task”