Wednesday seemed like a daze and Thursday morning is not shaping up to be much clearer.  Ralph and I both picked up a cold on the long road trip back to New Jersey. Gee, guess we share everything!

Wednesday was spent unpacking the car and cleaning it out to take it back to Avis.  Then there was the unpacking the unpacking.  I got all of the general bags unpacked…the snack bags and things we try to keep close to us in the car when we’re traveling (tissues, paper towels because we’re messy!)

I got the water bottles out of the cooler and into the fridge.  My idea of freezing the water bottles to use in the cooler works really well.  I know, I hear that you’re not supposed to do that because of the cancer causing agents, but it works!  The bottles were still cold-ish and they went into the cooler Saturday morning.  Not bad!  Much better than using bagged ice which makes such a wet mess.

Still haven’t unpacked the suitcases, that will be today’s project.

After returning the rental car, we needed food.  There wasn’t really anything in the house and we thought a trip to the Gateway Diner would work for us.

I had my new favorite there, the veggie gyro…

It comes with a small Greek salad… 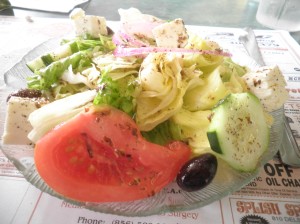 Weird perspective, objects in the photo are closer than they appear, especially the TOMATO!!  Good! 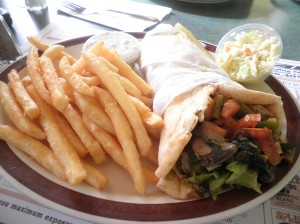 Let me start by saying I did NOT eat the fries!!  I forgot they came with it.  I brought them home for Ralph.  The gyro is so good-a combo of lettuce (?) mushrooms, tomato, green peppers, onions and cheese.  The pita is very soft and tasty.  It comes with tzaziki sauce and it’s very tasty.  It is messy though.  They wrap it in paper.  I think I’m going to ask next time to have it wrapped in foil.  Might work better.

This cold is making me feel very fuzzy.  I think I’m going back to bed.  I’ll leave you with the sunrise photo I took in Arkansas Tuesday morning. 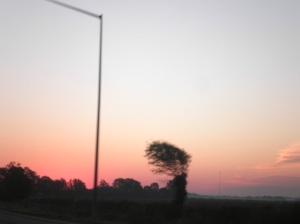 This entry was posted in Uncategorized. Bookmark the permalink.

4 responses to “Settling Back In”