You Never Know What You’ll Find

I’m so proud of myself!  After having gotten up at 3:30am on Friday, had my coffee and posted on BCDC…no I didn’t take a nap.  I dug right in and continued my sorting (and tossing) on my porch where my desk and computer are.

I organized a big pile of recipes that I had printed out.  I’ve been putting them in plastic page covers and putting them in a 3 ring notebook.  It makes life so much easier.  Actually, I threw out a lot of them.  Funny how something looks good when you first see it, but then later…not so much.

I got a lot done on Thursday and I felt like I wanted to keep up the momentum. I feel like I’m really accomplishing things.  I keep finding things though that I don’t know what to do with.  I’ve found 4 or 5 old planner/datebooks.  I can’t decide if I can just toss them or if I need to keep them.  They’re not journals so they don’t have much more in them than doctor’s appointments, scheduled family dinners and what I wore to work that day.  But I’m very much on the fence as to whether I should toss them.  I guess I really need to go through more carefully and see if there’s anything of more importance in them.  A job for another day.

I found lots of old cd’s for other computers so the will be living in the trash can from now on.  Didn’t find anything else that required shredding…thank goodness because that’s got a big pile of stuff on it.

That’s actually a pretty exciting pile.  Those folders hold page after page of poetry that I’ve written over the years.  Some of it I haven’t seen for years because they were in a cabinet that I didn’t look in very often.  I’m looking forward to having some time to look through and see exactly what’s in there.

I found some more photos that I didn’t realize I had.

Let me introduce Toby and Bimbo!  They are my best friend Gail’s dogs.  They’ve both passed away and I can’t wait to give her this picture!  She’s going to love it!

I found a jar full of Kennedy head 50 cent pieces.  I looked them up and the most they’re worth now is about $2.00.  I was hoping for a windfall, but no such luck!  Also found some silver certificate dollar bills.  They’re not worth much either.  Oh, well, some things are only really worth something to us.

This next thing is dumb as can be but I almost went to tears when I found it.  Lodged behind a filing cabinet, I found this… 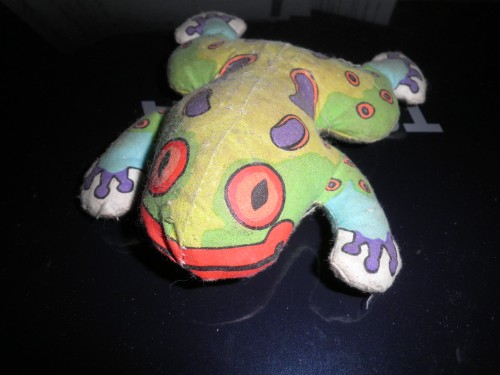 It’s the froggy toy that was the favorite of my two kitties, Iris and Lily.  I can remember how they would fight over it and stand on their back legs while they batted it around with their front feet.  They’ve been gone for quite a few years now and this touched me.  Actually, one of the things I found was the photos that I received in the mail from the lady who gave them to me.  Tiny, tiny little kittens…Ok, I miss my kitties…

So, I’m hoping for a good result when I get to Weight Watchers on Saturday morning.  I’ve been working hard at staying on track and we will see what we see.

This entry was posted in Uncategorized and tagged photography, poetry, sorting and packing, Weight Watchers. Bookmark the permalink.

8 responses to “You Never Know What You’ll Find”