Strange But Good~That’s A Weird Breakfast!

It’s been a few weeks since I joined in on Strange But Good hostessed by Laura at Sprint 2 The Table so I thought I’d join the party!  There are always so many crazy good food ideas there.  Be sure to check it out.

I started out the week making a crock pot full of one of my favorite things…Lentils.  Everything was going smoothly.  After that I started on a pot of my Weight Watchers Veggie Soup.  In the midst of making the soup, I suddenly realized that I’d made a mistake with the lentils.  Usually, I put in a cup of dried lentils into my small crock pot with onion, garlic and seasoning.  As I was throwing scraps into the trash can I noticed the bag from the lentils…I had put in the Entire Bag!!

I ended up having to move the lentils from one crock pot to another, which in the end was almost too small.  I also ended up with a huge amount of cooked lentils.  I use a cup of them each time I eat the soup which is not usually a problem but I was left with double my usual stash.  I had to think of other ways to use them

Often on BCDC I talk about foods that are not attractive but tasty.  This dish certainly fits into that description. 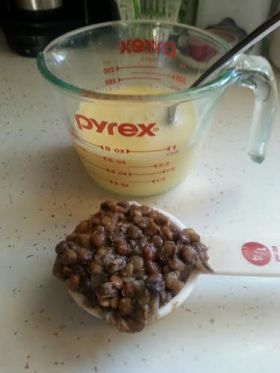 To my usual mixture of egg substitute and egg whites, I added a quarter cup of my cooked lentils.  I also added in some Mrs. Dash and crushed red pepper flakes.   Not pretty in the measuring cup. 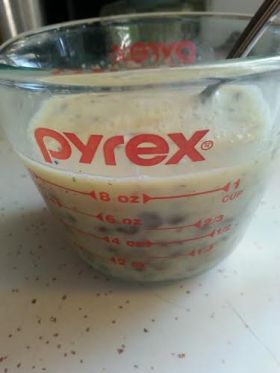 Not pretty when mixed in with the egg substitute. 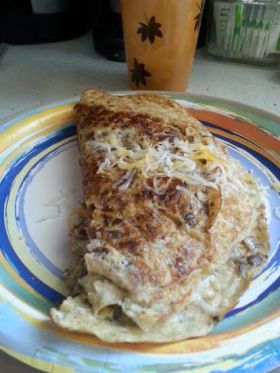 Not really all that pretty as a finished omelette.  I added some shredded 2% cheese inside and on top.   Not photogenic, true.  But really, really good!  Almost more importantly, it was also extremely filling.  When I have a regular omelette, I start to feel hungry in a couple of hours.  This kept me satisfied almost until lunch time.  I eat pretty early so this was an accomplishment.  It also gave me a nice protein boost of 4.5 extra grams over the regular omelette.  I’m pretty excited that I tried this and I’ve tried it again since I first figured it out.  Sounds weird I know, but give it a try!

Be sure to check out all of the wonderful strangeness over at Sprint 2 The Table today.

2 responses to “Strange But Good~That’s A Weird Breakfast!”